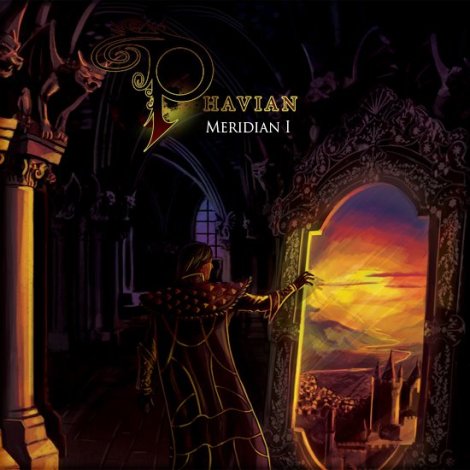 Having harnessed a truly unique sound of hard hitting guitar riffs, pristine vocals and haunting melodies;  Phavian are well on their way to success. What’s great about this band is, they aren’t afraid to take risks in order to test their abilities and satisfy their thriving following. Take the fact that they recorded for not only one album, but four albums at once as an example of this! We were lucky enough to have an interview with the band. Here, amongst other things, they spoke about; the formation of the band, their 4 album venture as well as the concepts behind these albums!  Enjoy!

Starting off with a little history about the band. When and how did the band form? And how did the name Phavian come about? Is there a story there?
Patrick, our drummer, and Puyan, one of our guitarists, are brothers so they have been playing together for years. Jason our bassist joined the band in 2006, and Elizabeth the keyboardist and vocalist joined up in late 2008. We went through a few second guitarists before we found Rob in 2012.

The name Phavian was actually a total accident. Puyan and Patrick were looking through a list of vampire names and found the name Phavant and thought it sounded like a cool band name. The next day, Puyan asked Patrick, “What was that name we liked? Phavian or something?” After realizing the name was actually Phavant, the brothers decided that they actually liked Phavian better – so it stuck.

What would be a strange or interesting fact that not many people know about the band, or would be surprised to find out?
We actually write all of our songs out in sheet music form before we learn to play or record them. As a result, sometimes we write things that are too difficult for us to play. Luckily it forces us to become better musicians as we learn the music we write.

Who would you say that as a band your main influences are?  Who would you compare yourselves to?
Opeth, Porcupine Tree, Rush, Orphaned Land, and Mastodon our some of our main influences. It’s hard to compare ourselves to bands like that though. They are some of the most iconic bands in prog. On the other hand, we resemble them a lot more than other female fronted metal bands like Evanescence or Lacuna Coil.

Is there one song in particular, by any existing band or artist, that as a band you wish you’d written and why?
There are a million songs that we all wish we had written: Deliverance (Opeth), Anesthetize (Porcupine Tree), Tom Sawyer (Rush), Take Five (Paul Desmond/Dave Brubeck), Hey Jude (The Beatles), Bohemian Rhapsody (Queen), or I’ll Be There For You (The Rembrandts). Why do we wish we wrote these songs? Because they are some of the greatest songs of our time…. or you know…. most profitable!

If you could choose any bands to go on tour with, i.e. a dream line up/dream team; who would they be and why?
It’s safe to say we would all agree that going on tour with Opeth or Porcupine Tree/Steven Wilson would be like a dream come true for us. Not only would it give us the chance to play to fans that truly dig our kind of music, but it would also give us the opportunity to be huge fan boys (and girl) and geek out with our heroes.

I’ve heard some pretty horrific stories from bands about their first live shows, what was your first ever live show like?
Our first live show wasn’t so bad actually! As far as horrific stories go though, we did play a battle of the bands where a different band’s amp got knocked over during their set. Before we knew it, guitars and basses were being hurled violently at the audience from the stage and a brawl resulted. It got out of control and the cops showed up when the promoter got hit in the head with a headstock. It was pretty terrible. We won the battle of the bands though, so at least something good came out of it all!

Any funny band/live show stories you wouldn’t mind sharing?
One of our funniest moments from our last tour was a post-show Karaoke session when Puyan and Rob decided to do King Crimson’s 21st Century Schizoid Man as a duet.  The only problem with that song as a karaoke tune is that it is nearly an eight minute song with mostly progtastic instrumentals and hardly any vocals. Needless to say hilarious interpretive dance ensued for the instrumental parts of the song. You can actually see the whole ridiculous thing on YouTube (http://www.youtube.com/watch?v=kUojeuDDf4I). It was probably the best eight minutes of our lives.

Is there anything that inspires you when you are writing the music and lyrics to your songs?
Absolutely. Our albums are all concept albums, which means the songs follow a story line throughout the album.  The lyrics and musical structure reflect the plot of the story as well as the feelings of the different characters within the concept.

You guys decided to do a two part concept that’s been divided into 4 albums: Meridian I and Meridian II which are currently available; Inversion, and Stretta which haven’t been released yet. The whole process must have been a challenge! What’s the concept behind these albums? What was the actual recording process like?
Meridian I and Meridian II follow the journey of a man’s rise to glory, and then his fall. Ultimately the world is destroyed by a dark power that he summons as he attempts to cure the world of its problems. Inversion and Stretta will be a sort of prequel to the Meridian albums, and follow the creation of the dark power that the main character summons at the end of Meridian II.

Recording four albums at once was a challenge. It was a lot of material to record in a very short amount of time. We are all glad we did it, but we would never recommend it to anyone else. We were in the studio for 2 months.  We started with the drums for all four albums, and then the bass. The guitars took the longest to record because of layering and doubling, and the vocals were recorded last once all the other instruments were in. It was a challenging process but we are extremely satisfied with how it all turned out.

I understand that the recording process for all 4 albums began in February 2011; does this mean that the songs for Inversion and Stretta have already been recorded? Is there a possible release date in mind for either of these albums?
Yes, all the songs for Inversion and Stretta were recorded at the same time as Meridian I and Meridian II. We don’t have an exact release date set for those albums yet, but we will be putting up more information on our website about when they will be released. You can also follow us on twitter and Facebook  for more information about upcoming album releases and shows.

Finally. What do you hope to have achieved in 10, maybe 15 years?
There’s a really good chance that most of our favorite bands won’t be too active in 10 or 15 years. Hopefully we’ll be able to take their place as one of the biggest and most influential prog bands out there.

Band of The Week: Don Broco

Send us an email if you think your band could be our band of the week! enquiries@musicdothash.com