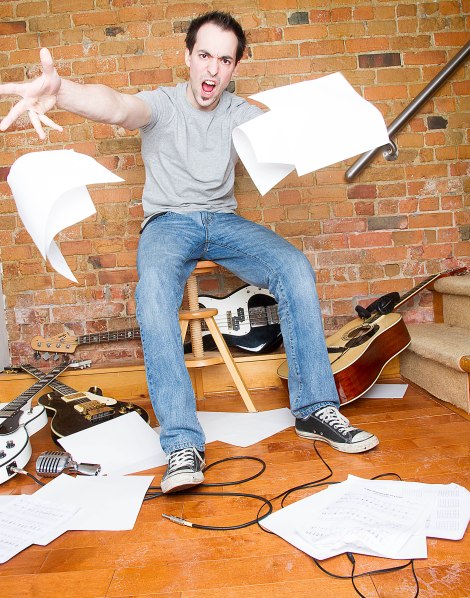 We found Chris Starr to be just that little bit  too cool to simply call this “An interview with Chris Starr,” so we decided to call this interview something a bit different. Thus a one off “Q and A With Chris Starr” was born. He wants his own  island with a dinosaur touristic attraction theme park, of cause he was going to get a special title.

Q: When did you know that music was what you wanted to get into? Did you have that one particular moment, or was it a gradual process?
A: I knew that It was something that I wanted when I was 23. That’s when I realized that it was no longer a hobby to me. It was a lifestyle. It’s what I felt I needed to do in life and I knew that if I stopped then and there, like most of my ex band mates did, it would feel like something was missing.

Q: What would be a strange or interesting fact that not many people know about you, or would be surprised to find out?
A: I could’ve became a professional athlete when I was younger

Q: For those who haven’t heard your music, how would you describe your overall sound using 3 imaginative words?
A: Raw, Symbolic, Engaging

Q: What would you say is unique about your sound?
A: The idea of making Pop music while keeping a Rock feel to it.

Q: Who would you say are your main influences?
A: Papa Roach, Linkin Park, 30 Seconds to Mars, Avenged Sevenfold, Breaking Benjamin and Green Day are the main bands that inspire me textually and musically.

Q: Is there one song in particular, by any existing band or artist, which you wish you’d written?
A: There’s quite a few I wish I had written actually haha but to pick one i’m going to have to go with The Reason by Hoobastank

Q: Is there anything that inspires you when you are writing the music and lyrics to your songs?
A: The context/mood of the lyrics help to write the music generally. As for writing the lyrics, I base myself on either a personal situation that I’ve lived or am living or sometimes, i’ll try to put myself in another persons shoes and write up something to sort of express for them and try to relate to their situation.

Q: Is there a message or a particular sense of feeling which you want people to take away from listening to your music?
A: When someone hears my music, deep down what I want is for them to feel like they can relate and open up about a subject. I want them to be moved not just by how I put it out but how they listen to it. To feel what I feel but as well make them realize on another level how they feel in regards to what I’m talking about.

Q: If you could choose to go on tour with anyone, dead or alive, who would it be and why?
A: Avenged Sevenfold for sure. They’re stage presence, to me, is flawless along with their music. They really know how to get a crowd going and to get some tips and tricks from pro’s like that would be a great lesson on how to up my game and gain valuable knowledge and experience.

Q: What do you hope to have achieved in 10, maybe 15 years?
A; Worlwide touring, several platinum selling albums and own an island with a dinosaur touristic attraction theme park hahaha. Honestly though, to record a few albums, visit the world with my music and play sell out shows where the crowd knows every lyric to your songs, that would be a dream come true.

Q: What do you hope the rest of 2013 brings for you? Anything in store for your fans?
A: 2013 is dedicated to the recording of my 1st album independently so they can keep an eye out for that. Aside from that, love, health and wealth!

Band of The Week: Don Broco

Send us an email if you think your band could be our band of the week! enquiries@musicdothash.com